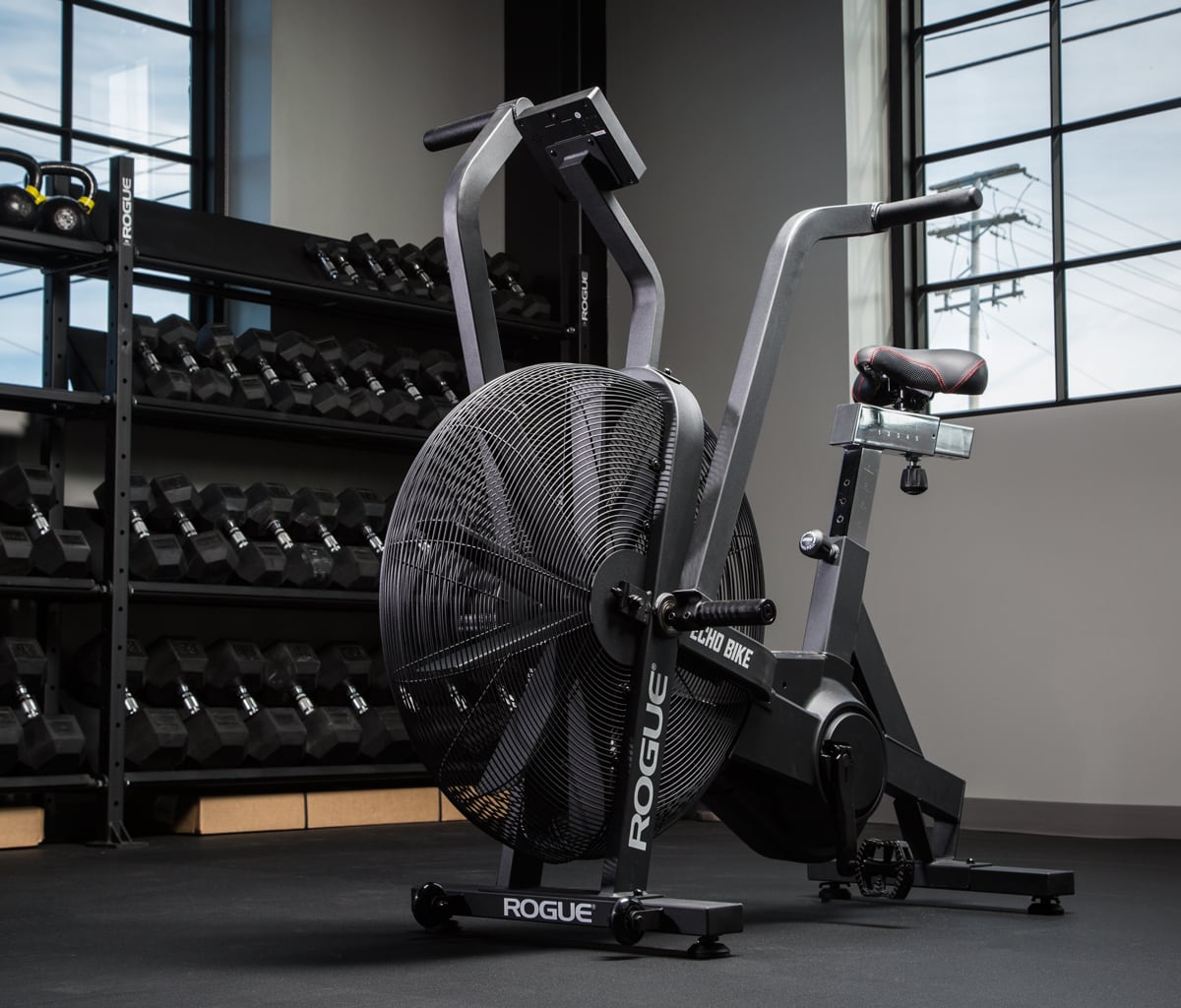 The 80s are back, baby, and they’re taking the fitness world by storm. No, we’re not talking jazzercise or calf warmers (although, if that’s your cup of tea, we pass no judgement). If you’ve stepped foot in any workout facility - particularly a CrossFit gym -  in the past few years, you might have noticed something that looks more at home in your grandmother’s basement than in a modern gym: an air bike.

They’re one of the hottest things in fitness, and today, we’re going to be reviewing a model that many claim to be the king of air  bikes: the Rogue Echo Bike. Poke around the internet, and you’ll see no shortage of fitness gurus and workout blogs espousing the virtues of what Rogue has positioned as their flagship endurance bike. But is it really all it’s cracked up to be? Can you believe the hype?

We put it through its paces to separate fact from fiction, and found the Rogue Echo Bike offered many surprises, to say the least.

Why Ride an Air Bike?

Popularized in decades of yore as great solutions for rehab and marketed to housewives as an easy home workout tool, air bikes spiked in popularity before disappearing from the popular consciousness. Then, some endeavoring CrossFitt-ers realized just how much of a punch these machines pack, and they began incorporating them into their workouts.

Riding an air bike involves both your legs and your arms by forcing you to push and pull the handlebars as you pedal, engaging a ton of muscles, including quads, glutes, hamstrings, back, chest, and shoulders. Additionally, there are clear cardiovascular benefits to endurance training. Air bikes can also help with metabolic conditioning, improving aerobic capacity without the risk of burning off muscle mass.

Now, if you’re a seasoned CrossFit vet, or have experience with air bikes, you know these bad boys can kick your butt. They’re great alternatives to rowing machines, and they’re light on joints. The anaerobic workout is particularly impactful when incorporated into a demanding WOD. It’s having your cake and eating it too, if your cake was a low-impact, high-reward workout and eating it was getting awesome glutes...or something like that. 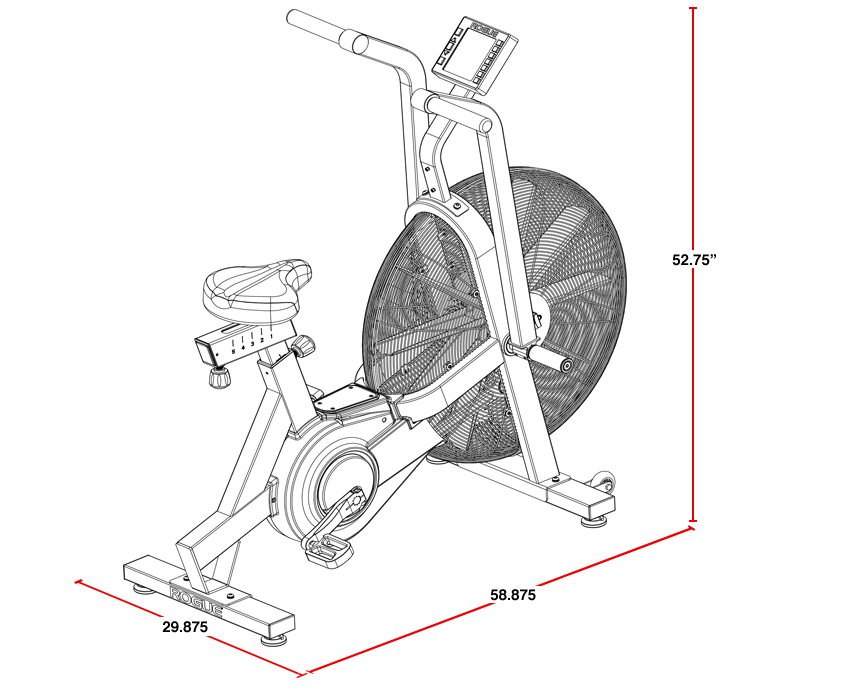 They’re an excellent choice if you are looking to maximize health and fitness benefits, especially if you don’t have a whole of free time to dedicate to endless exercises. Even used alone, air bikes can help you build a sculpted, toned body that feels as great as it looks. So, is the Rogue Echo Bike the right air bike for your workout needs?

When the Rogue Echo Bike was first released in 2018, it caused a major stir. Fitness insiders and reviewers predicted that it would shake up the industry and increase competition. How could one air bike cause all that fuss?

First of all, it was coming from Rogue, one of the largest fitness brands in the world with a proven track record of quality and innovation. But then when the bike was released, people realized just how well made it was. Quality was clearly at the top of Rogue’s mind when they sent these specs off the factory, because every piece and mechanism on the Rogue Echo Bike shouts “durability.” It’s a beast of a machine, weighing in at 127LBS, with a weight load of up to 350LBS. Rogue describes it as “overbuilt,” and we’re inclined to agree - in a good way. All of the parts are constructed from heavy-duty steel, as opposed to the plastic found on many other air bikes. This is particularly important when it comes to the fan, whose formed steel blades cut smoothly through the air, creating consistent resistance, which can be a problem with plastic fan blades.

At 52.75” tall, 58.875” long, and 29.875” wide at the handles, the Rogue Echo Bike will work in most any home gym space, but can also be fit into tighter environments, like living rooms or bedrooms. The weight offered by the solid steel frame isn’t in the habit of wobbling, which is great for longer rides (and anyone who doesn’t like feeling like they’re gonna get tossed). Even with its beefy profile, the bike can be easily carted around and maneuvered using the two 1” polyurethane front wheels. Adaptable rubber leveling feet on both ends of the bike automatically adjust to your floor, ensuring a level ride, no matter the surface. Speaking of adjustable, the padded seat features 8 height settings, and 5 front-to-back positions for riders of all sizes.

One of the features that most sets the Rogue Echo Bike apart from the rest of the pack is its superb belt-drive system. Most air bikes use a traditional chain-drive system to power the fan wheel, but these are notoriously clunky and hard to deal with. The Rogue Echo Bike’s belt drive is smooth as butter, and the sturdy housing makes sure it never gets yanked off track. This is one of the reasons why we haven’t had to deal with any maintenance issues on the bike.

The Rogue Echo Bike’s 6.376” x 6.375” high-contrast LCD screen is refreshingly minimalist, giving you all the stats you need without any of the useless fluff used to woo consumers. It lets athletes track their performance using the metrics like interval, distance, calories burned, heart rate, and more, as well as giving you the ability to set targets. 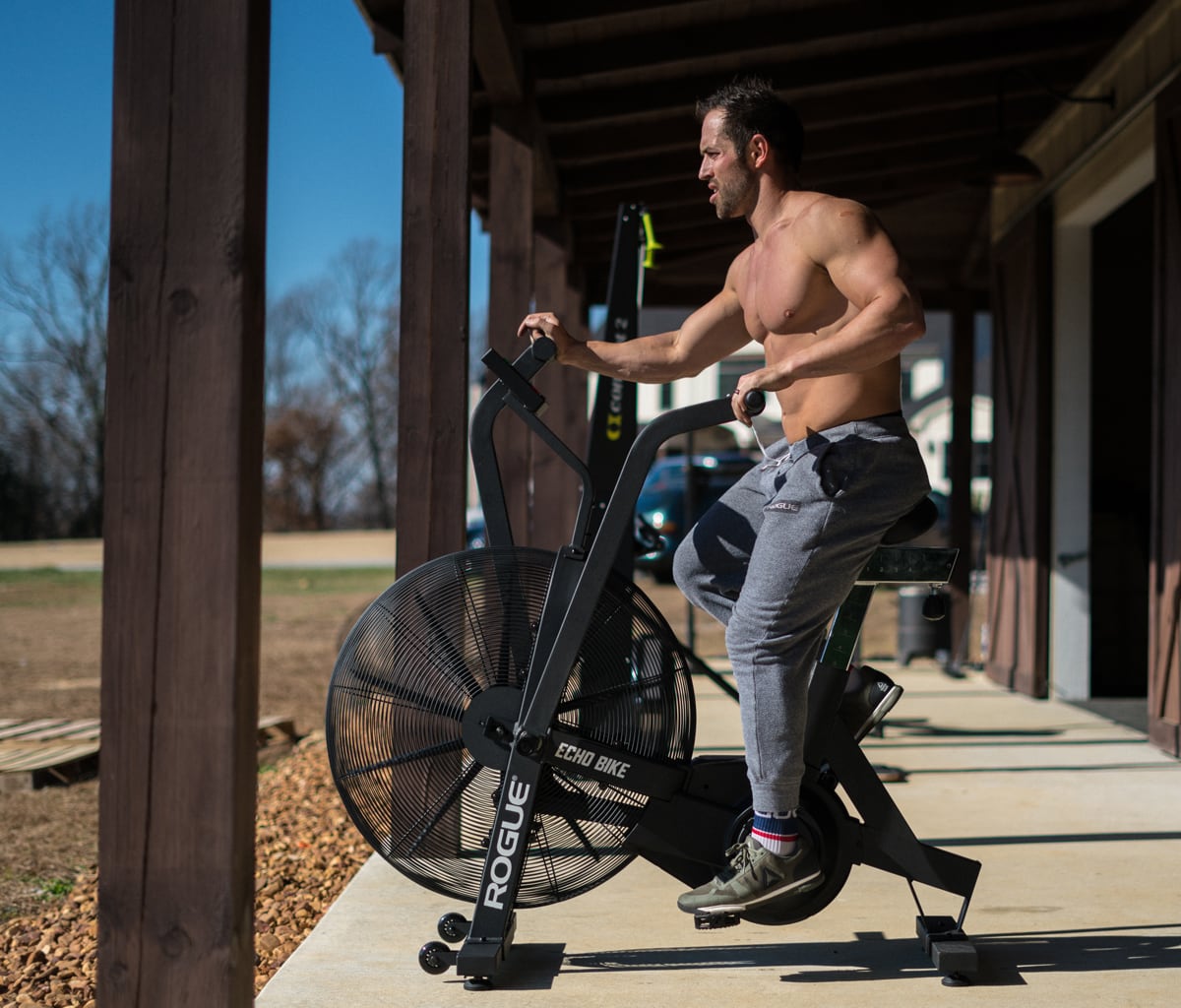 At $795, the Rogue Echo Bike is actually one of the most affordable air bikes on the market. This is mind-boggling given its ridiculous quality.

The proof was in the pudding - the Rogue Echo Bike is the cream of the crop when it comes to air bikes. It’s no wonder they’ve become a staple in CrossFit affiliates and big-box gyms alike. Our experience with the Rogue Echo Bike was simply a dream.

Our workouts were fun and exciting, to say nothing of challenging. When we wanted to push ourselves, we could do so without fear of breaking anything - it would take the Hulk to break this thing. When we wanted to do more recovery work, though, the Rogue Echo Bike was also able to accommodate us. Durability was never a concern, and like we said, over an extended period, we haven’t had to do any maintenance work.

If you’re looking for a great way to add cardio training into your workout routine, look no further than the Rogue Echo Bike. It’s not only the best air bike available, it’s also the best value. You’ve got to try this thing.

I have been a Sports fanatic for over 4 decades now! I have a lovely wife and 2 kids. I have been in sports all my life and helping others succeed in their fitness goals keeping it simple. I played college baseball, spent years doing triathlons, explore new nutrition supplements all the time, bike 3000 plus miles a year and I still lift weights regularly.